By Mason Jones and Ed Bond

The Netherlands, another name for Holland, is situated in Western Europe. West of the country, across the English Channel, is England. To the north is the North Sea, to the east is Germany and to the south lies Belgium.

The Netherlands has been around for a few thousand years. The Romans has conquered it. So did the Spaniards and Napoleon Bonaparte of France. In 1597, Holland obtained its independence from Spain and has been a free country ever since. The Kingdom of the Netherlands was formed in 1815 when the first king, King William of Orange, setup the monarchy.

Although a small country, it has contributed considerably to the world stage. One of the better known products are cheese, windmills and dikes. The Dutch, as the citizens are called by English speakers, are also considered the best dam builders in the world.

Government: Constitutional Monarchy (at present a Queen reigns over the country) 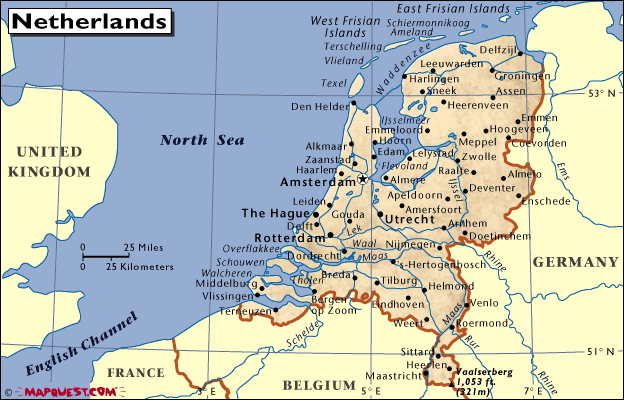 We all know where cheese comes from but did you know that Holland has been producing cheese since before 400 AD? No wonder they are good at it.

There are many different types of cheese, of which ôGoudaö and ôEdamö are the most famous ones. The taste and softness of cheese depend on its age, yes - cheese have age. Soft young cheese is ripened for about 3 weeks. Sharp cheese ripens between 2 and 7 months while the very sharp varieties need to ripen for at least 12 months.

I, Flat Stanley, was lucky enough to sample some of the finest cheese Holland has to offer. I went to a cheese store in Amsterdam and let my taste buds take over. 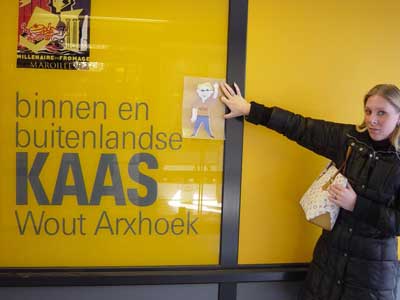 The word for cheese in Dutch is ĹKaasĺ 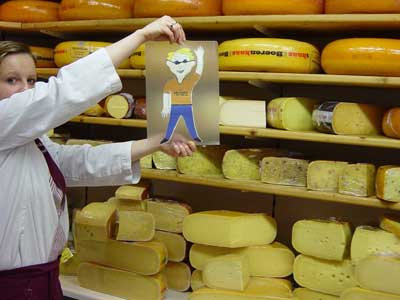 So many to choose from.

The young sales lady was nice enough to help me up so not only could I see the different types of cheese, I could smell them too. I donĺt mind saying that some of them smell like bad wind, but they sure taste delicious.

You can see in the picture the different varieties of cheese. The younger cheese are at the middle bottom of the picture while the older and sharper ones are found at the left bottom and middle shelf of the picture.

Another product Holland is famous for is Delft Blue, pottery which is hand-painted then baked. There are many types of Delft Blue, although the word Ĺblueĺ does not really convey all the possible colors available. Delft Blue potteries come in many colors but the color blue is the most famous one.

Delft Blue dates back to over 400 hundred years ago when Holland was a world power. The Dutch traded with the Chinese and that is where they got the idea of painting pottery and baking it. The first Dutch pottery was established in the city of Delft in The Netherlands. The first ink used was specially developed for the Dutch pottery industry. The ink turns blue when it comes out of the oven, hence the name ĹDelft Blueĺ.

Since each piece is hand-painted, you will find that each piece has its unique design. Even the same pottery with, what seems, having the same design, you will still notice subtle differences between them. 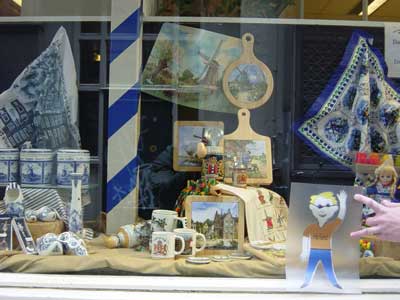 Everyone in Holland knows what wooden shoes are and how they look. Do you know how they look like? Made from the willow or poplar trees, it is light and durable. Easy to get in and out of.

Everybody over the whole world thinks that all the people in Holland wear wooden shoes. But thatĺs not right. Only a few people wear them, mostly farmers. They usually wear thick socks in the summer to protect their feet. And in the winter, they wear wooden shoes one size too big so they can also stuff old newspapers in it, besides the thick socks. This is to keep their feet warm and dry. Why, you ask, would farmers still wear wooden shoes when boots are available? Imagine a farmer stepping on a piece of nail out on the farm? Or worse, being stepped on by a cow? 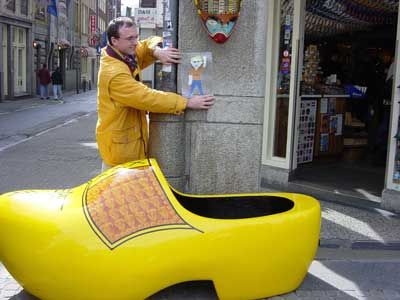 I was trying to buy the shoe you see in the picture but it is not my size. I found a pair thatĺll fit me but alas, they are made of paper and not of wood. I ended up walking away from the store without really buying any.

The Royal Palace on Dam Square

The work on The Royal Palace began in the year 1648. It took 17 years to complete and finally in 1665, it was opened to the public. It was initially built as Amsterdamĺs City Hall. When it was finally finished, it was the biggest governmental building in Europe at that time. 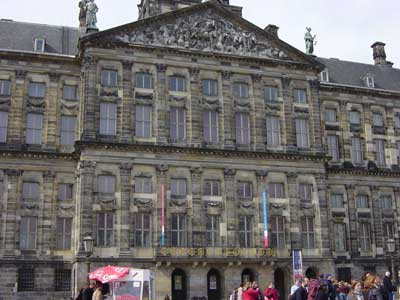 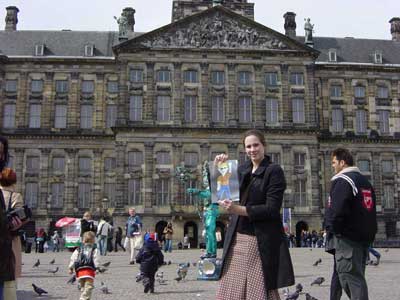 I asked this nice young girl if she was willing to give me a tour of the palace but she refused. According to her I was a bit on the skinny side and sheĺs afraid to crush me. Oh well, maybe next time Iĺll meet someone whoĺs willing to take me.

The Dam Square in front of The Palace was used in the old days as a public forum. Since they didnĺt have newspapers or televisions in those days, one would announce any new laws here. Public executions were also performed here. In those days, the parents would bring their children to watch hangings and tortures. Iĺm glad I live this time period.

The Dam Square is one of the most famous landmarks in Amsterdam. Then and now.

Holland is considered a delta environment, meaning that the country has lots of rivers and marshes. Water from the neighboring countries such as Germany and Belgium flows into Holland on its way to the North Sea. Because of this, most cities in Holland are peppered with canals. They function as roads in the old days. It was faster and smoother than the old brick roads.

However, since the invention of cars and trains, canals has lost its use as the main transportation highway. Nowadays, it provides the cities with peace and tranquility to those who seek a place to relax. 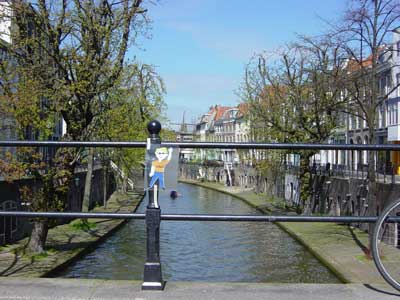 When I was standing on top of this bridge, I saw someone canoeing on the canal. I tried to hitch a ride by sticking my hand out but he was so concentrated in what heĺs doing he just passed me by. When I get older and stronger, Iĺll hire a canoe and travel this waterway to my heartĺs content.

Since most cities in Holland are surrounded by canals and rivers, they must have a way of controlling the water. One of the best way of doing this is to build locks. No, not the ones you need a key to open, but the ones that prevent or allow water to flow. Panama Canal has one of the most famous locks in the world.

Locks manage the water level in canals and rivers. When closed, it prevents flooding in case of high water. When open, it equalizes the water level between the two connecting parts of the canal or river.

All locks in the city are usually opened a couple of times a month to let water flow freely. This is one way of keeping the canals in the city clean. 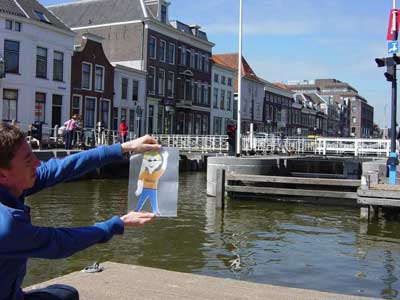 I was just in time to see this particular lock open to allow boats pass by.

Boat passing by an open lock 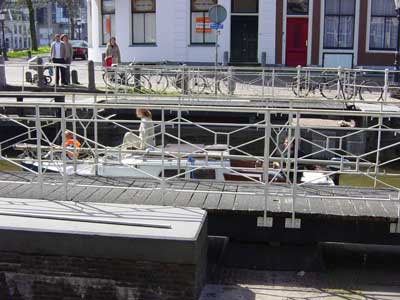 The other lock in the distance... 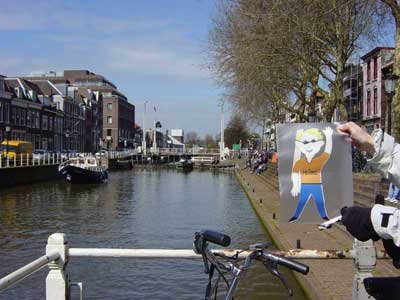 As famous as windmills are, very few outside of Holland know the purpose of these wind machines. The present windmills that you see on the California countryside and other parts of the world are used to produce electricity. They didnĺt have any electricity a few hundred years ago, so what were the uses for these windmills? Do you know?

One use of a windmill is as a water pump. Holland has reclaimed most of its land from the sea. They would build a dike around a piece of water. Thereafter, they would build windmills on top of the dikes to drain the enclosed water. This usually takes around 50 years to complete. Once the sea bed is dry, this piece of land is now called a Ĺpolderĺ and people would inhabit it. 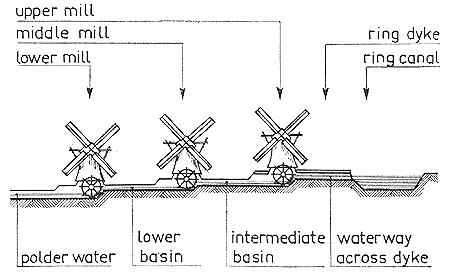 Windmills are also used to cut lumber. Wind would turn the sails which in turn will drive a big wooden saw. Another use for a windmill is to grind grain. Farmers would bring their grain to the local windmill so it can be crushed to become flour by a giant round stone. Of course, the round stone is powered by, you guessed it, the sails of the windmill. 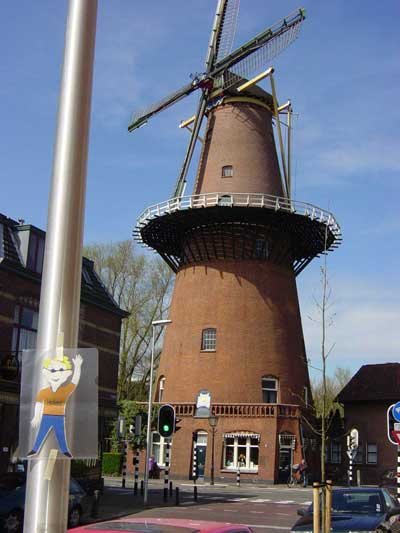 Since this kind of windmill is no longer of any use in our present day situations, the Dutch government has turned them into museums. People could also rent them from the government to establish their residency. This particular windmill is turned into a healthy food store and bakery.

My stay in Holland was very short. Unfortunately, I wasnĺt able to see all the wonderful places this country has to offer. At this time of the year, itĺs cold and wet. Being made of material that cannot withstand water, I was limited to nice and sunny days. I had to wait for nice weather before I could go out and see places. As you can see, I always had my raincoat on.

I hope that you enjoyed my Dutch adventure. Hopefully, I could come back here and experience more exciting adventures in the future.

Thank you for supporting the Flat Stanley Project. www.flatstanley.com